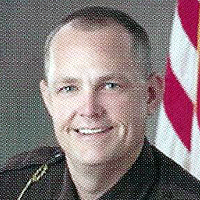 With Barry County Sheriff Dar Leaf declining to take part in a July 26  debate with Robert Jordan, his challenger in next week’s primary election, the stage was left to Jordan for an hour of questions from a moderator and a receptive audience. Jordan is the captain in the Eaton County Sheriff's Office in charge of management of the Eaton County Jail He is one of 386 certified jail managers in the country.

J-Ad Graphics CEO Fred Jacobs, who hosted the event, said he invited Leaf to the 7 p.m. debate as late as 4 p.m. Tuesday. An estimated 150 to 200 people filled seats at the community room at the COA with more standing along the walls. The moderator, retired Barry County Chief Judge Jim Fisher, asked Jordan several questions, with more from the audience.

Asked why he was running for sheriff, Jordan said Barry County is his home and he decided “enough is enough” in 2014 when the FBI used a search warrant to seize an unknown amount of records from the sheriff’s office. “Why serve a search warrant on a sheriff? Subpoenas are for people who cooperate, search warrants are for those who don’t cooperate.”

Jordan spoke about the things he has emphasized during his campaign; the lack of effective management and supervision at the sheriff’s office. “I want to make a difference for you guys,” he said to a round of applause; the first of several during the event.

In answers to questions, Jordan said he would keep one armored vehicle painted with sheriff colors and identified as a sheriff’s vehicle and get rid of all the rest of the military equipment at the sheriff’s office.

Some of the changes he would make include body cameras for every deputy, strong emphasis on community policing, improving relations with other law enforcement in and out of the county, working collaboratively with other county departments and the courts, developing a Citizen’s Academy, possibly an Citizen’s Ambassador group to help with searches and community events, and working with the Hastings Police Department to expand its Cadet program.

He supports the idea of increased police coverage to townships and villages by contract, specialized courts programs like the drug, sobriety and veteran’s courts, and diversion programs for the mentally ill.

There should be a liaison officer in every school in the county to work with young people. He believes police interacting with young people in schools and community policing is effective and results in better community relations now and later. Officer training would be required to help them deal with all the facets of the public, he said, and promised every phone call to the office would have a response, either he or another official would return calls if they were not readily available.

Jordan spent some time talking about the sheriff’s budget and financial management;  its growth over the last ten years and possible ways to trim costs. Supervision on all four shifts would be required in his administration and he would sign every overtime slip before it goes to payroll and hire an undersheriff who, “has roots and lives in Barry County.”

He compared Leaf's his career path with his own.  Leaf was a road patrol deputy, school liaison and then sheriff, he said. “I’m an administrator; I was a sergeant, then lieutenant, then captain, and soon-to-be sheriff,” he said to applause. His pledge to “bring efficient and effective management of law enforcement” to the sheriff’s office brought more applause.

He received a standing ovation as the meeting ended.