**You can’t call Grant Pratt a 14-year-old kid. He is one, but he’s really more. He’s a young man who has cancer, and the way he handles his struggle inspires others much older to have patience, remember what is important in life and that they can get through the tough times.

Grant, the son of Greg and Liz Pratt, younger brother of Garrett Pratt, all of Lowell, has relatives in Hastings.

Jeff Pratt is Hastings Police Chief, his wife Julie Nakfoor-Pratt is Barry County Prosecutor. To Grant, they’re just Uncle Jeff and Aunt Julie, and both admire the way Grant is handling his illness.

Diagnosed in November last year with acute lymphoblastic leukemia, Grant goes through his treatments with quiet determination, planning for when his chemo is over, keeping up his physical conditioning and his grades in school.

Mom, a teacher at Reeths Puffer School in Muskegon, dad Greg, superintendent of Lowell Public Schools and older brother Garrett are not his only support system; his fight envelopes his extended family and the wider Lowell community.

“When we first heard that he had cancer, I thought the floor was going to go out from below me,” Aunt Julie said. “It’s one thing to hear of a cancer diagnosis in an adult, it is a completely different story when it is a child.

“Grant is an amazing young man who has shown such strength and courage throughout his treatment…One of the qualities I admire most in Grant is that he does not complain, he just continues to fight,” she said.
“To have such an active and full life interrupted by a life-threatening illness is unfortunate. However, there have been times when Grant worries more about everybody around him then he does himself.

“Grant has a very strong and loving family. The community support for him has been incredible! We continue to pray for a strong and full recovery for him!”

With his diagnosis, Grant’s family and the community immediately started pulling for him. “Mom and dad are awesome,” he said. The Reeths Puffer basketball team wore the their orange shirts with “Pratt Strong” on them to show support.

“Grant will do what he wants to do after he graduates,” his uncle said. “He really wants to give back. He’s talked about pediatric oncology when we’re at the hospital, about giving back.”

Grant talked about his experience, “my story, my troubles,” at a football camp sponsored by Gilda’s Club. Afterward, a young man told him his sister was going through a similar situation and told Grant his story helped him.

Girls are not on Grant’s radar at all, yet, so his summer should be filled with riding his bike, hanging with buddies, and putting off taking out the garbage or mowing the lawn until prodded by mom or dad. Garrett might take him for pizza. Instead, two days a week, he goes to Helen DeVos Children’s Hospital’s 10th floor outpatient clinic for a lumbar puncture, chemo injected into the spinal column and other chemo drugs delivered trough the  port in his chest over a relatively short visit, four hours; or a longer stretch of eight or nine hours. He has spent up to a week at a time in the hospital.

After, there are the side effects; headaches, body aches, nausea, fatigue, mouth sores, joint pain, swelling and hair loss. He looks forward to when he doesn’t have to deal with that. “Sometimes, I forget what it feels like to be normal.”

At 14, Grant is older than most of the kids in pediatrics.

“I try to be nice to them. You want to make them feel better when they have shots, if you can.”

The days he doesn’t spend at the hospital, Grant’s day is weightlifting first thing in the morning, breakfast, playing video games and hanging with Garrett.

He is “excited about being a freshman” at Lowell High School in September and he won’t be behind his classmates. His teachers send him homework he takes with him to work on at the hospital. Sometimes, he admits he just doesn’t feel like studying so he doesn’t, but he still maintains his A average. He is a three sport athlete, football, baseball and wrestling. A goal for him is to play on the football team this year.

While affecting others by example, Grant tells what he has learned. “It’s taught me to work harder; persevere thought the tougher times. You can’t worry about it too much, when it’s not in your control. You need a positive attitude, and don’t get down on yourself.”  When he does start to feel low, his solution is to mingle with the people who are supporting him. “I just go see them,” he said.

This is round two with cancer for the Pratts, mom was diagnosed with breast cancer in 2012 and is in remission. “She showed me how to fight this disease on a daily basis,” Grant said. He goes on a maintenance chemo regimen in October.

The center of attention of articles in the Detroit Free Press and Grand Rapids Press, Grant was nervous about  publicity at first, “but you get used to it.”  In fact, “I just wrote an article about my experience for the Lowell Ledger.” On the 26th he was at a wrestling camp named “Nothing for GRANTed” at Grandville High School with proceeds to benefit pediatric cancer research in his honor. DeVos Hospital arranged for Grant to attend a Tiger game Friday, going on the field and meeting all the players. Uncle Jeff is going along.

“In today’s world, there are lots of bad things going on,” he said. “His diagnosis rocked everybody’s world. He’s really amazing on how he reacts; how he’s handled it.”

He has pledged to shave his head should Grant lose his hair to chemo.  He will live up to his word, he said, but he really, really hopes Grant won’t lose his hair.

If Grant does lose his hair,  Uncle Jeff knows he will have no choice but to try to handle being bald at least as well as he knows Grant will. 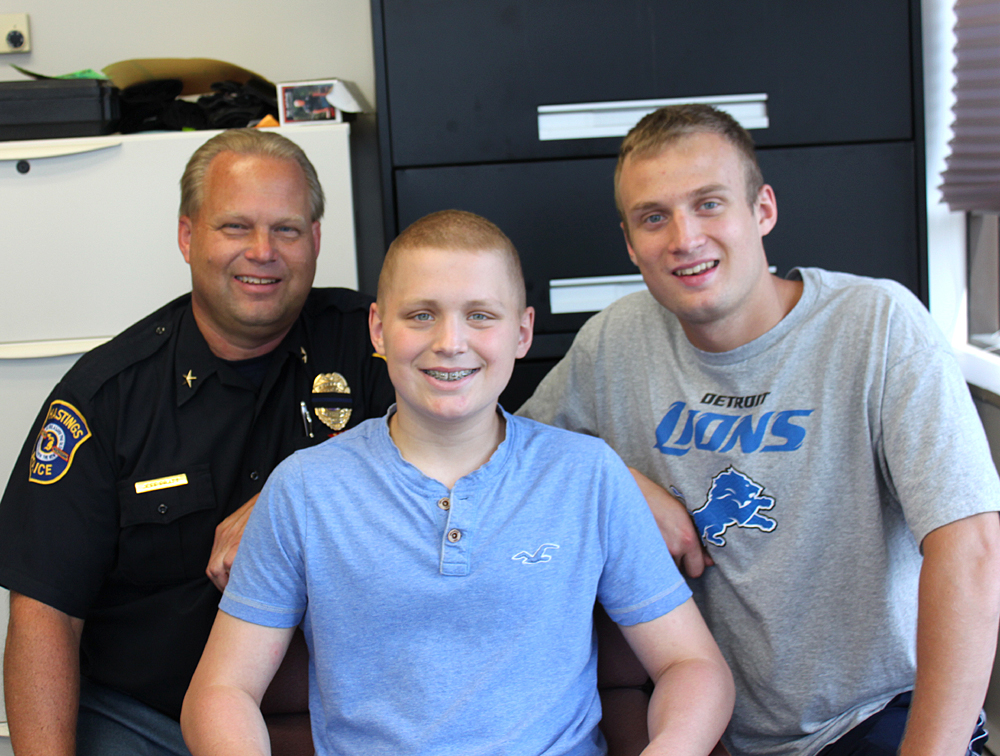