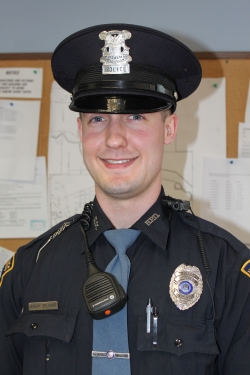 Belknap, 22, from Otsego, graduated from Kalamazoo Valley Police Academy in November of 2016, and went to work as a St. Joseph County Sheriff’s deputy.

He applied for an open position in Hastings PD because working with community policing in a smaller venue than a county, gives him a better chance to get to interact with the people he serves.

“Hastings has a lot of community policing activities going. I love the opportunity to know who you are protecting on a daily basis.” He sees his job as helping people while enforcing the law, something that fits in with community policing. He said all police officers should be approachable and points to the liaison program in the schools as an example.

In his third week on the department, he’s is in the field training phase which “is pretty tough, but it’s teaching me a lot. This is a very good department with good administration.”

Belknap was a volunteer reserve officer in Allegan for two years, but his interest dates back to fifth grade when he was named a Conflict Manager, helping teachers on the playground at recess. “I always enjoyed that and the teachers taught me how to resolve conflicts.”

He is into physical training “big time” and weight lifting, and he’s in the outdoors whenever he gets the chance. Belknap has agreed to take part in the annual flag football game, the fundraiser “Cops vs Cadets” when the officers take on the Hastings Police Cadets. It doesn’t matter where they put him on the field. “Whatever role I am given to play, I will play,” he said with a smile.