During Monday morning’s snow fall, there were more than 15 accidents on I-96.  Most of them were property damage accidents and slide offs due to the weather.  There was a large back up due to this accident west bound on I-96 just west of Sunfield Hwy.

While traveling west bound, the driver of a tractor trailer lost control of their vehicle.  The truck sideswiped a pick up before going into the median and overturning.  The driver was hauling 3000 lbs. reams of paper that were thrown from the truck upon it over turning.  Several of these landed in the expressway causing other vehicles to have to swerve to avoid hitting them.  Five vehicles ended up hitting the papers or other vehicles during the evasive maneuvers.  There were no injuries to parties involved.

The expressway was down to one lane for the next five hours while efforts were taken to upright the truck and clean up the papers.  Reed and Hoppes, Berlin/Orange fire department, life EMS, and Ionia County Central Dispatch assisted on scene. 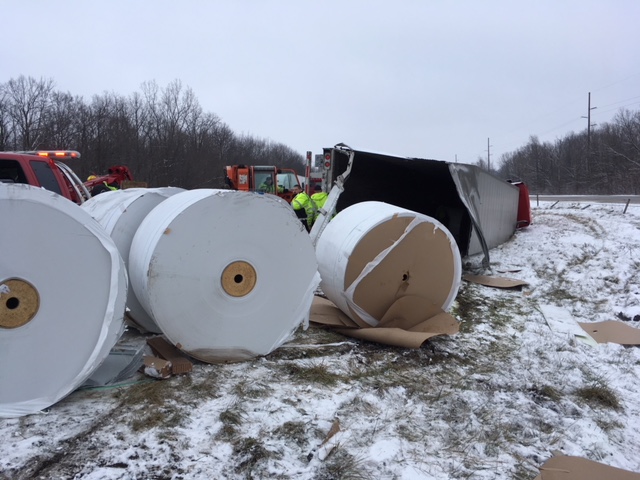