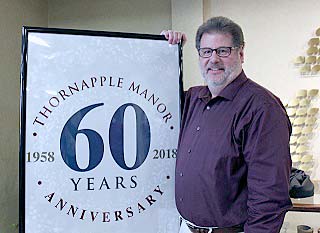 The innovative 102 bed Thornapple Valley Home and Medical Care Facility built in 1955 at 2700 Nashville Road in Barry County replaced the “county poor farm.” One of the first of its kind, it was recognized as the “County Facility Second to None in the Nation” by the Michigan Department of Social Welfare and, in answer to demand, added another 36 beds just 18 months later.

In 1986, the residents changed the name to Thornapple Manor to get away from the “poor farm” stigma. As Thornapple Manor offered state of the art in 21st Century services, its expansion continued over the years with the support of Barry County citizens, Geiger read.

Thornapple Cottages, a three-year project with 23 beds opened in 2013, creating private rooms and a more home like atmosphere to meet the need for specialized care for Alzheimer and dementia.

“Thornapple Manor continues to lead the way in 24-hour skilled care, memory care and rehabilitation services, earning the coveted Centers for Medicaid and Medicare Services 5 Star Rating,” he read. The facility strives to find ways to collaborate and create partnerships in care delivery to reduce costs while improving care and outcomes for the residents.

“Thornapple Manor looks forward to serving Barry County residents now and in the future, providing person-centered care in a manner that is nurturing and welcoming to its residents, families and the community, recognizing that as care providers it is its duty to provide a safe haven for mind, body and spirit, allowing each individual to have a life lived well, full of encouragement and love,” he concluded.

Haney thanked the commission for the resolution, saying he was humbled by the outpouring of support from the community, adding that the credit all goes to the staff for its outstanding service.