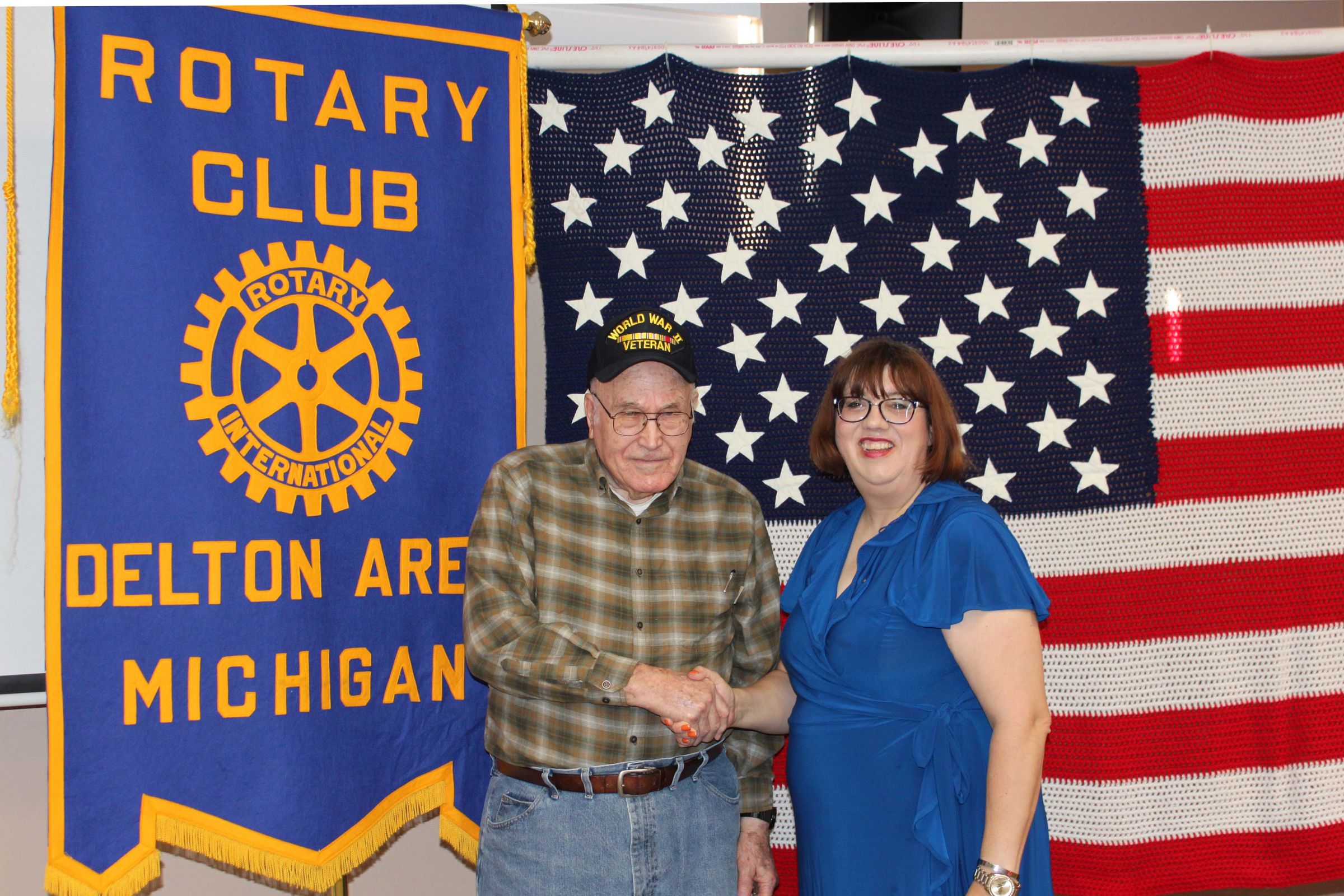 WWII veteran Louie Hall served with the U.S. Marines in the South Pacific on Guadalcanal, one of the southern Solomon Islands and the first major allied offense in the Pacific and he also served on Okinawa in the waning days of the war. Hall was an honored guest of the Delton Rotary Club on Thursday, June 14. The Rotary gave Hall an American flag presented to him by Barry County Sheriff’s Deputy Kevin Erb.

It is fitting that it was also Flag Day, with a huge American flag crocheted by Rotarian Junior Homister dominating the front of the meeting room. A 30-video of the Battle of Iwo Jima, mostly combat footage, showed the harsh conditions the Americans and their allies endured fighting the Japanese for the South Pacific islands.

Louie was a 17-year-old kid from Comstock when he enlisted in the U.S, Marines the day after his 17th birthday in August, 1942. Why the marines? “I don’t know; I just wanted to win the war…they told me I could finish high school and would not go overseas for a year. With those conditions, my mother signed for me; in October, I was aboard ship heading to the South Pacific.

The U.S.S. President Monroe, an attack transport ship carried him to New Zeeland. From there he was sent to Guadalcanal and his first combat, still 17 years old. “I was scared plenty of times,” he said.

On Guadalcanal he worked with an 81 mm mortar crew, where he pulled a two-wheeled mortar cart loaded with the heavy shells. “I never worked so hard in my life,” he recalled. His most vivid memory was when they came under machine fire and the third mortar they fired back hit the center of the machine gun nest.

He remembers arms and legs and other body parts flying into the air, “and the men all jumping up and down and waving our arms like we’d just made a touchdown.” After four months on Guadalcanal, he contracted malaria and  was shipped home to recover still before his 18th birthday.

While he recovered from malaria, he served on guard duty in the largest dry dock in the world at that time in Bayonne New Jersey, and went to intelligence school.

When he was  sent to Okinawa, “as a scout and observer, I could sit on a hill and make faces at the enemy,” he quipped.  But, he also saw combat. His most intense memory of Okinawa was, “when I saw my best friend killed by a hand grenade to the stomach.”

"That was near the end of Okinawa; when the (atomic) bombs fell, that was the end of all of it.”

When Louie returned home, he was a corporal in the 6th regiment of the 2nd Marine Division. He had also served in the 1st Division.

With a sly smile, he said: “I was in the 2nd division the first time I went over and in the 1st Division the second time when I went over”

Home for good, he went to Western Michigan University for a time, later opened an insurance business, then a printing business, printing all of the Bible Trivia series. He and his late wife June were married for 24 years and parents of Gregory, Terry, Wayne, Phil, Judy and Kathy.

Asked his thoughts about the experience. Looking back 75 years, he said: “Well, I wouldn’t do it again.” 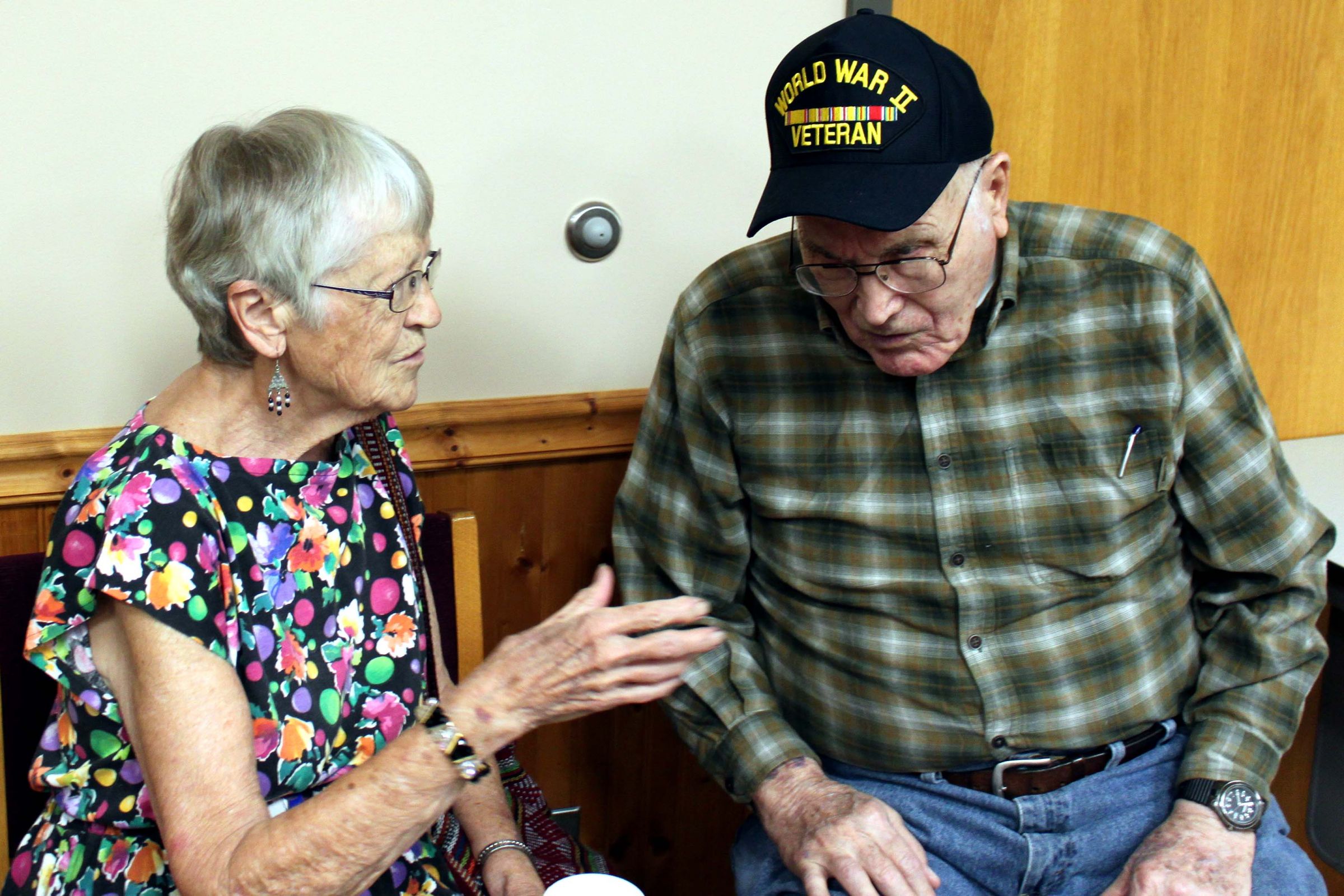 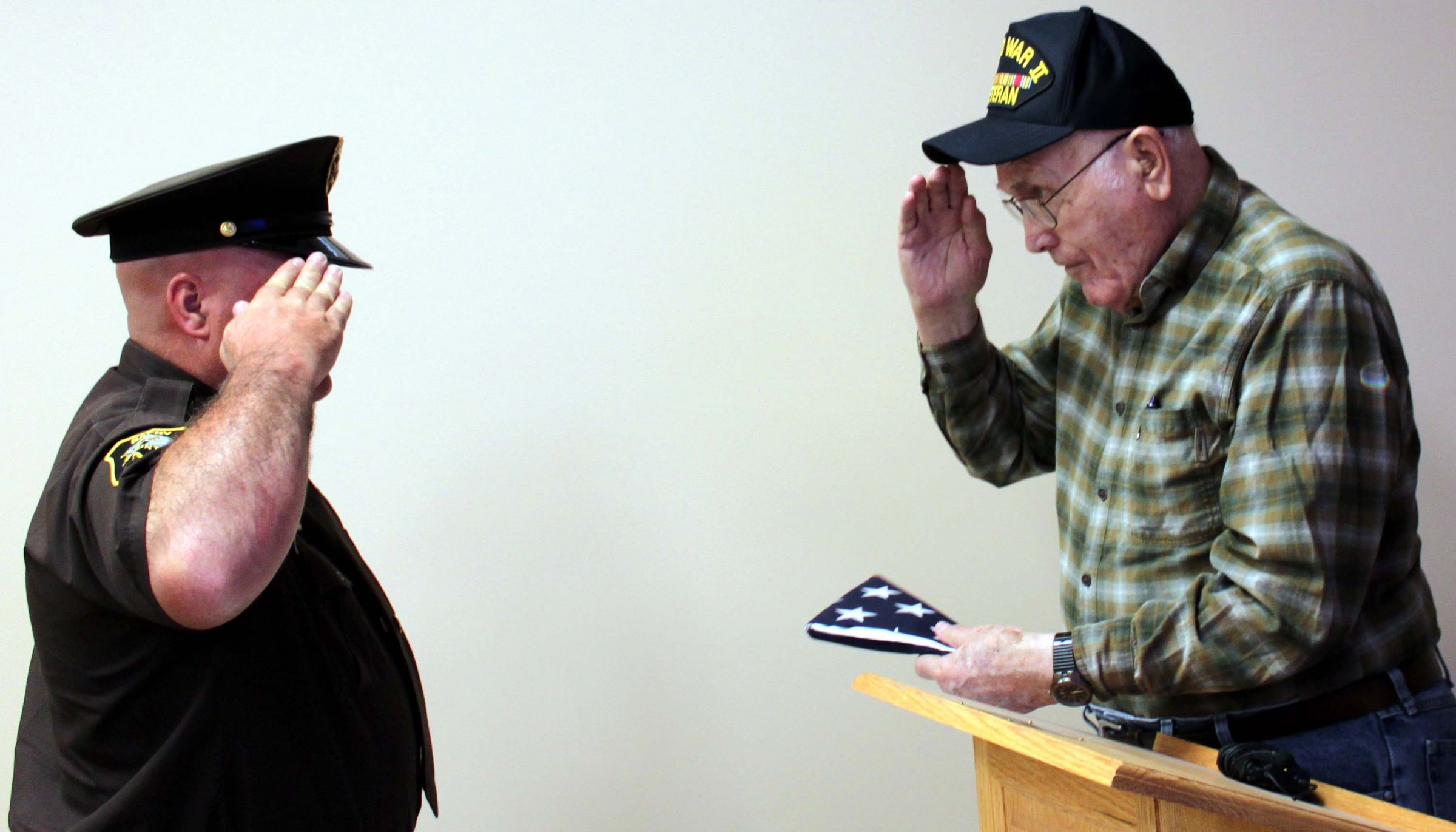 Louis Hall after presenting him with an American flag. 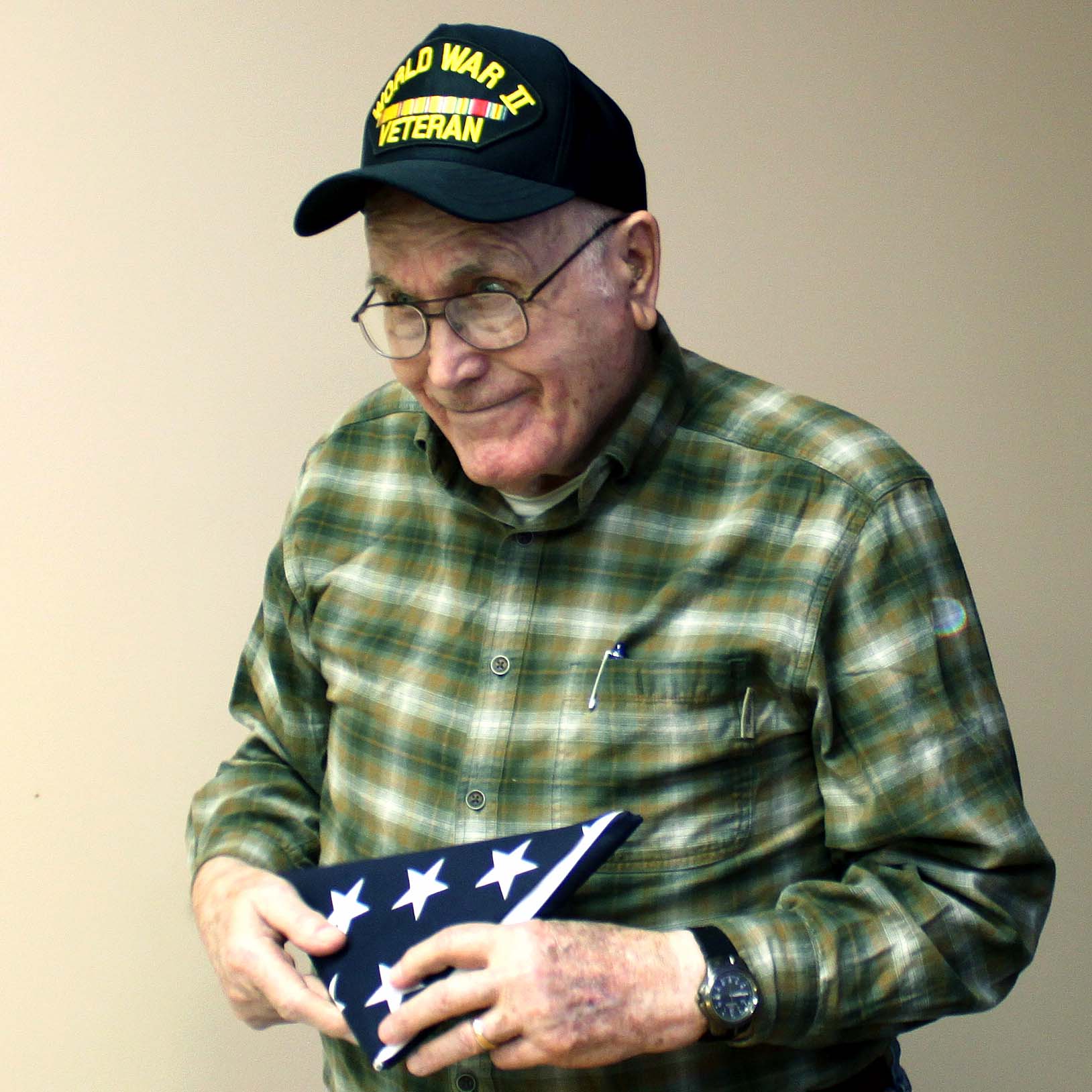 Louie Hall, a Maine veteran of combat on Guadalcanal and Okinawa in the South Pacific, smiles as he shows the American flag just presented to him. 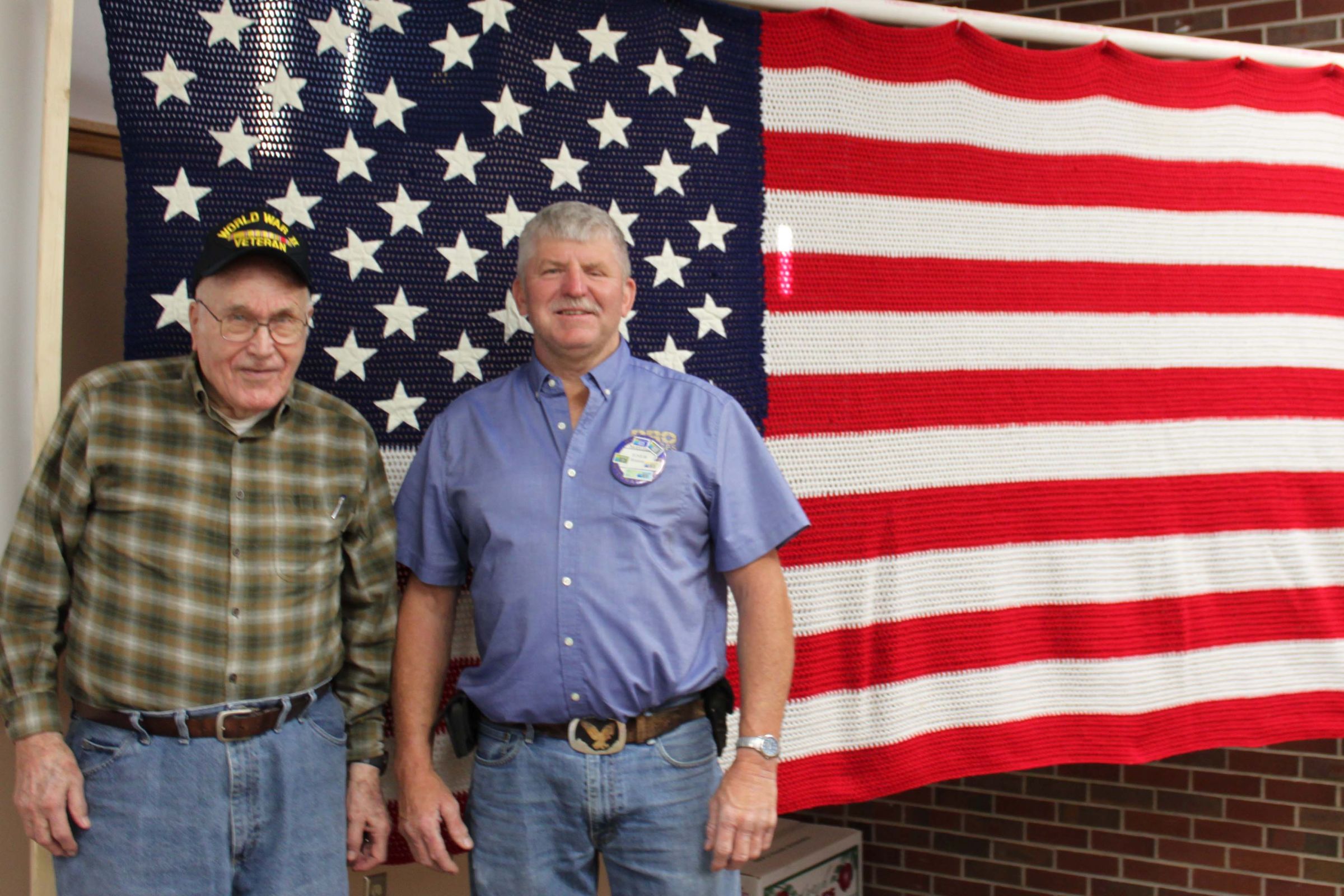