Posted About Four Years Ago by WBCH 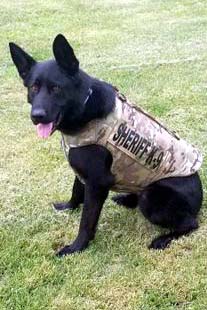 Allegan County Sheriff’s Office K9 Luca has received a bullet and stab protective vest thanks to a charitable donation from non-profit organization, Vested Interest in K9s, Inc. The vest was sponsored by Sharon Peters of Gross Pointe Shores, MI, and embroidered with the sentiment, “In memory of Det. Lt. Richard J. Scott.”

Vested Interest in K9s, Inc. is a 501c (3) charity located in East Taunton, MA, whose mission is to provide bullet and stab protective vests and other assistance to dogs of law enforcement and related agencies throughout the United States.

The charity was established in 2009 to assist law enforcement agencies with potentially lifesaving body armor for their four-legged K9 officers. Since its inception, Vested Interest in K9s, Inc. provided over 3,000 protective vests in 50 states, through private and corporate donations, at a value of $5.7 million dollars. //

The program is open to dogs actively employed in the U.S. with law enforcement or related agencies who are certified and at least 20 months of age. New K9 graduates, as well as K9s with expired vests, are eligible to participate.

For more information or to learn about volunteer opportunities, call 508-824-6978. Vested Interest in K9s, Inc. provides information, lists events, and accepts tax-deductible donations of any denomination at www.vik9s.org or mailed to P.O. Box 9 East Taunton, MA 02718.

Luca and his partner, Deputy Ryan Rewa, have been working together for almost a year.  Luca is trained in narcotics detection, tracking and handler protection/suspect apprehension and is a valuable member of the Allegan County Sheriff’s Office K9 team. Luca, Rewa, the sheriff’s office and the citizens of Allegan County thank Sharon Peters and Vested Interest in K9s, Inc. for the donation.