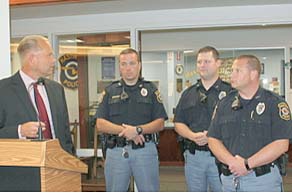 Another new officer, Nate Pickett, will be at the next council meeting, Pratt said.

“I enjoy watching the enthusiasm that our new hires bring to our police department and their willingness to be a part of, and to give back to, our community,” Pratt said.

Klein is from Hastings, has served on the city council and as Community Development director and was a reserve officer for the department.

Klein left city employment and went through the police academy, sponsored by Kalamazoo Department of Public Safety. After about a year of service for KDPS, Klein came back to work for the city and the chance to give back to the community where he lives, Pratt said.

James Mead was a reserve officer in Hastings for about a year and a half before he attended the police academy. Shortly after his graduation, there was an opening at HPD, he was hired and is in his training program at the department.

Scott Tenney attended the same police academy as Klein and also worked for KDPS. With a little recruiting help from Klein, Tenney joined HPD about a month ago. He is also in his training program.

Nate Pickett came from the Ionia County Sheriff’s office where he was a corrections officer. He joined the department in February and is assigned to the 4 p.m. to midnight shift. He is also a captain at an Ionia County township fire department, Pratt said.

Pratt also suggested with National Night Out ready to go on Aug. 7, from 5 p.m. to 8 p.m., organizers are urging people to stop by the Hastings Police Department, Hastings Public Library or the Barry County Sheriff’s Office before the event to pick up bracelets used to select winners of raffle prizes and avoid the long lines when entering Tyden Park for the event.

Hastings police officers, Barry County Sheriff’s deputies and Michigan State troopers, area fire department firefighters and ambulance service personnel will bring their equipment and demonstrate what they do in emergency response. The event promotes a sense of community, positive public relations, safety and trust between the public and emergency services personnel who serve them

In other business Monday, the council approved two ordinances as recommended by the Planning Commission. Ordinance 558 rezones a number of properties along East Thorn Street from D-1 or D-2 industrial to R-2 residential.  Ordinance 559 changes the zoning classification of a parcel in the northeast quadrant of the West Woodlawn Avenue-County Club Drive intersection from A-1 apartment to R-R rural residential.