Posted About Three Years Ago by Jean Gallup 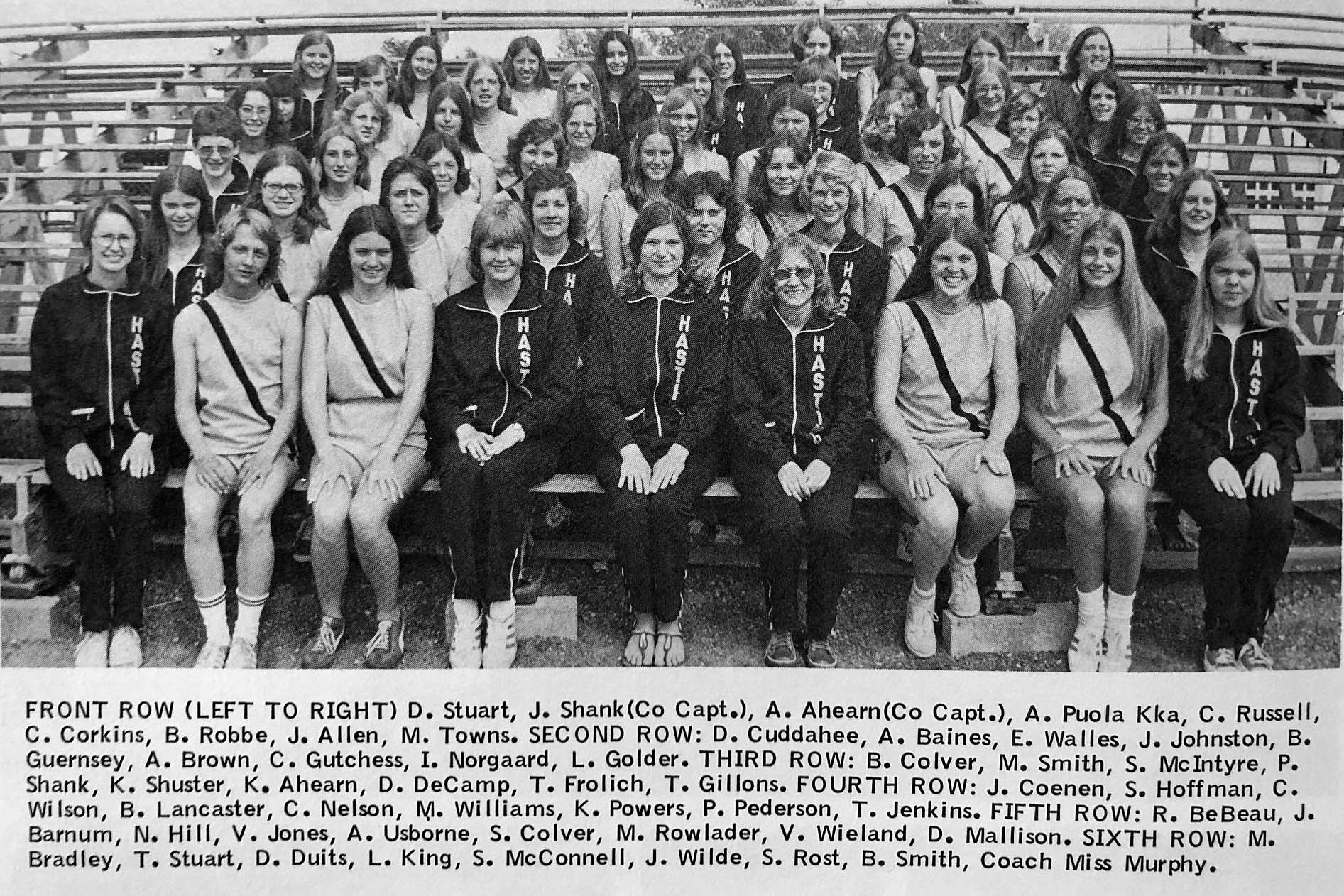 **Wayne Oom was a student at Hastings schools and remembers the record boards on the gym wall. “I wanted to be up there someday—whether I got there or not is not the point, the fact is, it motivated me to work hard, keep my grades up and stay out of trouble.”

The presentation of two records boards with the history of Hastings High School Track & Field history was held at the HHS Track and Field Team Awards Ceremony and Record board unveiling at the Performing Arts Center June 3.

Creating the boards, one with the current Track & Field records, and another listing of each all-state Track & Field athlete, and both with Cross Country athletes, was a “big team effort,” Oom said.

The response to the boards is gratifying for the team that put it together.

“What is most exciting is that younger kids are enthuasiastic; they are excited about it too. We have really strong teams this year,” Oom said. “I want these boards to be the same motivator for the current and future student athletes at HHS.” 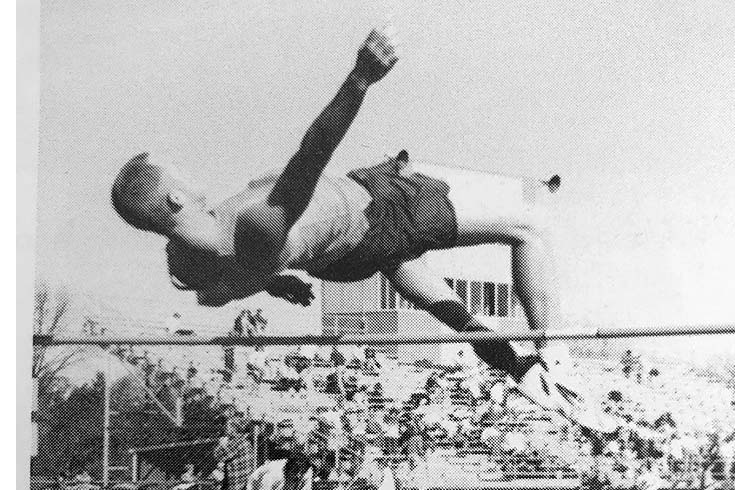 “How hard could it be?” Oom remembers thinking. “We’ll put it together in a couple of months, in time to display it at the first football game…two years later, here we are…”

The aluminum “boards” will get a polycarbonate finish and then will be installed, one on each side of the entrance to Johnson Field, by the time school starts in the fall.

The group decided to work on records from 1925 forward, the first year the MHSAA began having state track meets for boys. For girls, it was not until 1975, Oom noted.

Looking at the boards, they seem quite simple, and you realize some of the names are from families you know. But keep looking. The boards are incredibly detailed, with names, dates, events, times, with small banners denoting team winners at state, times converted from yardage to metric with a small “c” beside them, and more. 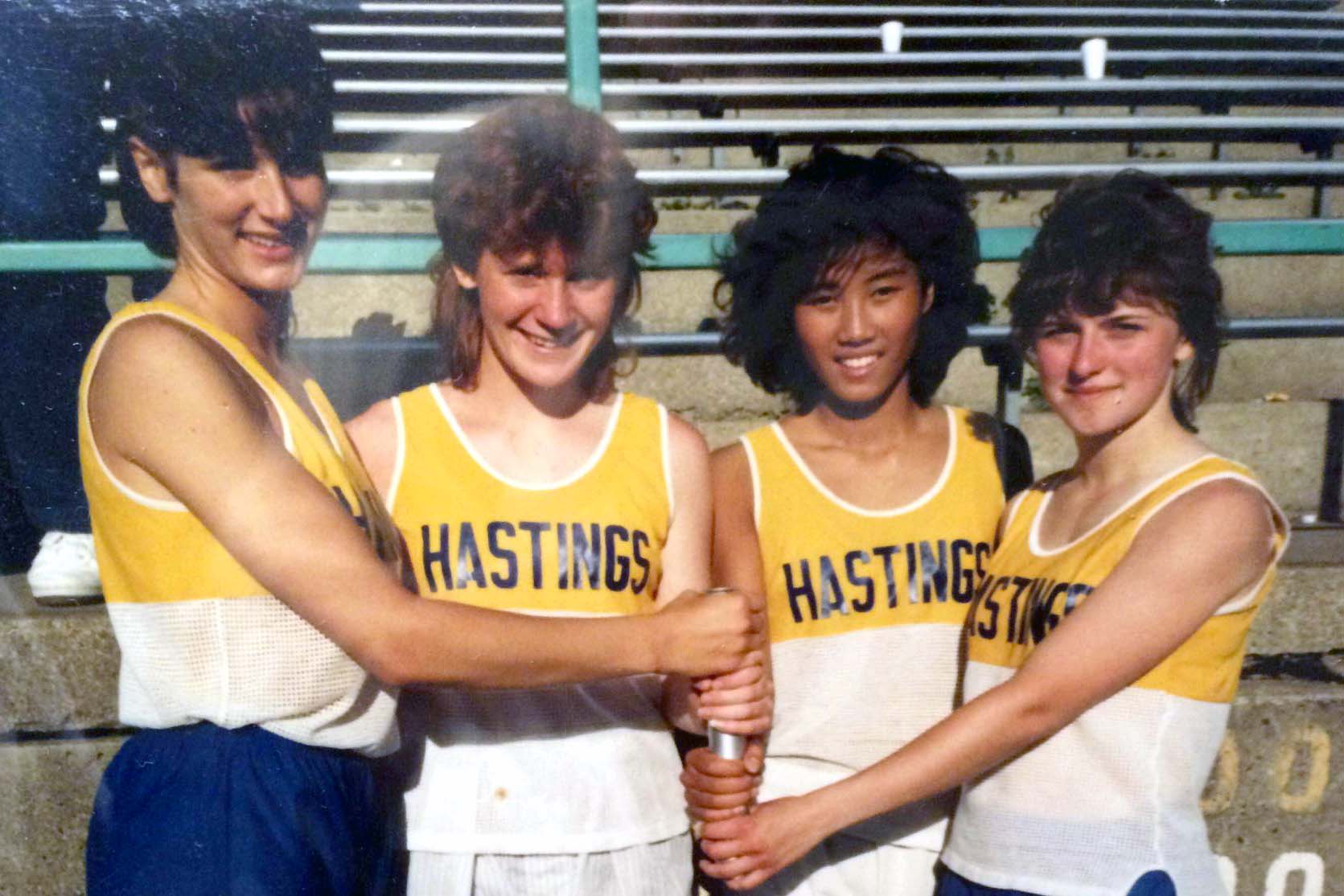 Some names appear again and again, some just once.

There are stories behind many of the athletes, like Tom Duits, Oom  said.

Duits was the first Michigan native to break the four-minute mile in college. When running for team USA, he held an American record in a 4X1500 m relay. During the 1979 tryouts for the 1980 Olympics, Duits was named “number one hopeful” for the 1500 metric mile for the upcoming games.

Politics and the “cold war” dashed his hopes; the United States boycotted the games and his opportunity for international recognition was gone. 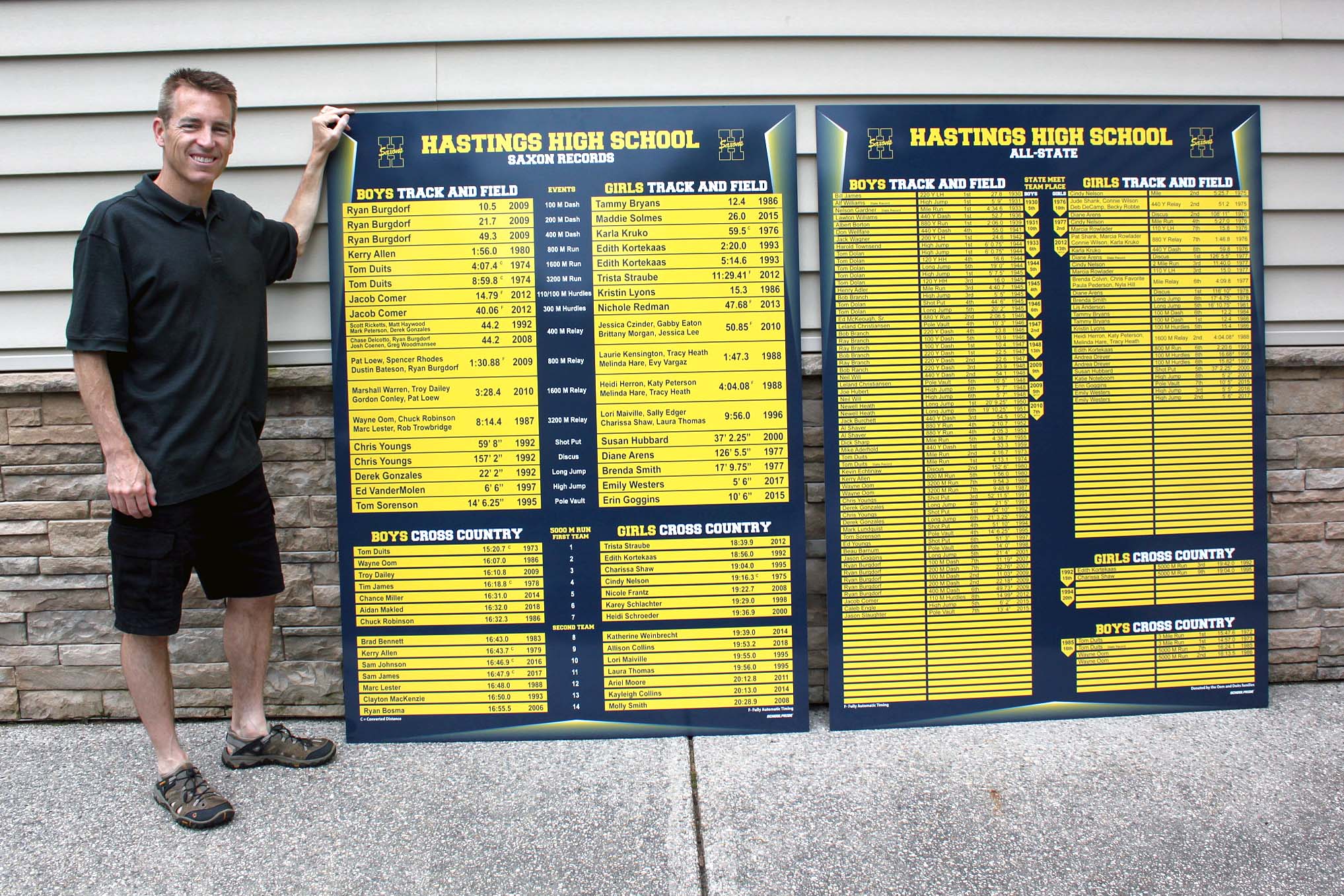 Brothers Bob and Ray Branch in 1947 were the two fastest sprinters in the state; they were local celebrities and were called by their first names in news stories. Bob Branch was the biggest star; he was all-state four separate years, freshman through senior,  from 1945-1948. He was all-state in the high jump as a freshman. 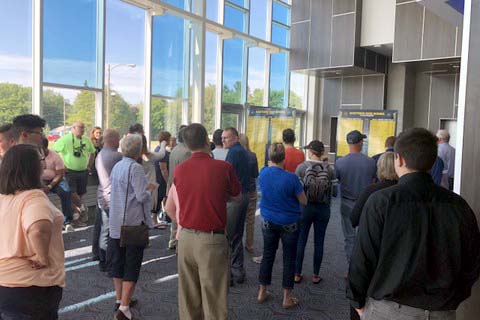 The 1940’s were the “Golden Era” for Hastings High School boys track, with 24 all-state performances in five consecutive years the team placed 5th, 4th, 6th, 2nd and 13th in the state.

The mid-70’s teams were the girls track “Glory Days” when the 1975 girl’s team included 10 all-state, or future all-state, athletes. The team placed 10th in the state in ’76 and 2nd in ’77. Two of the girls, Cindy Nelson and Diane Arens, were all-state for three separate years. 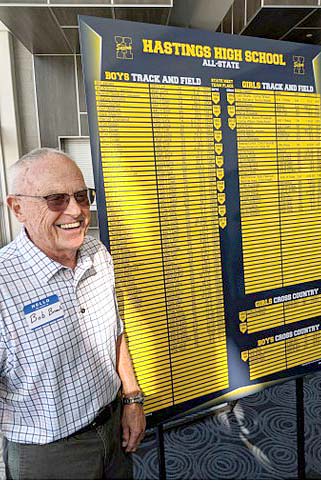 There’s room for more outstanding Hastings athletes on the boards and it can be expanded in the future.

“The math says the girls are filling up the board at a faster rate that our boys--that’s why we left more open spaces on the girl’s side. I’m curious to see who fills their side first,” Oom said.

He closed the presentation by quoting Duits,

“Tom said  ’every record is breakable,’  so, we want to see the younger kids break some records. Let’s get some new names up here. We’re pulling for you.” 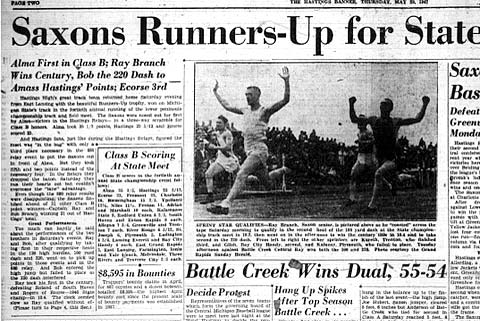 A little about the Ooms: The Oom family were athletes; Wayne in running, Dave in tennis, Laura in softball.  Dad Bernie is a well-known longtime coach.

Carrie Duits said Wayne was an outstanding runner in High School; he is more modest, saying: “I think my best times were pedestrian since my freshman son has already beaten nearly all of them.” His wife Kate was in multiple sports as a child and the fine arts in high school and is a great supporter of their kid's activities. Son Josh, 15, is a freshman in track, and Rachel, 12, a figure skater and cross country runner. 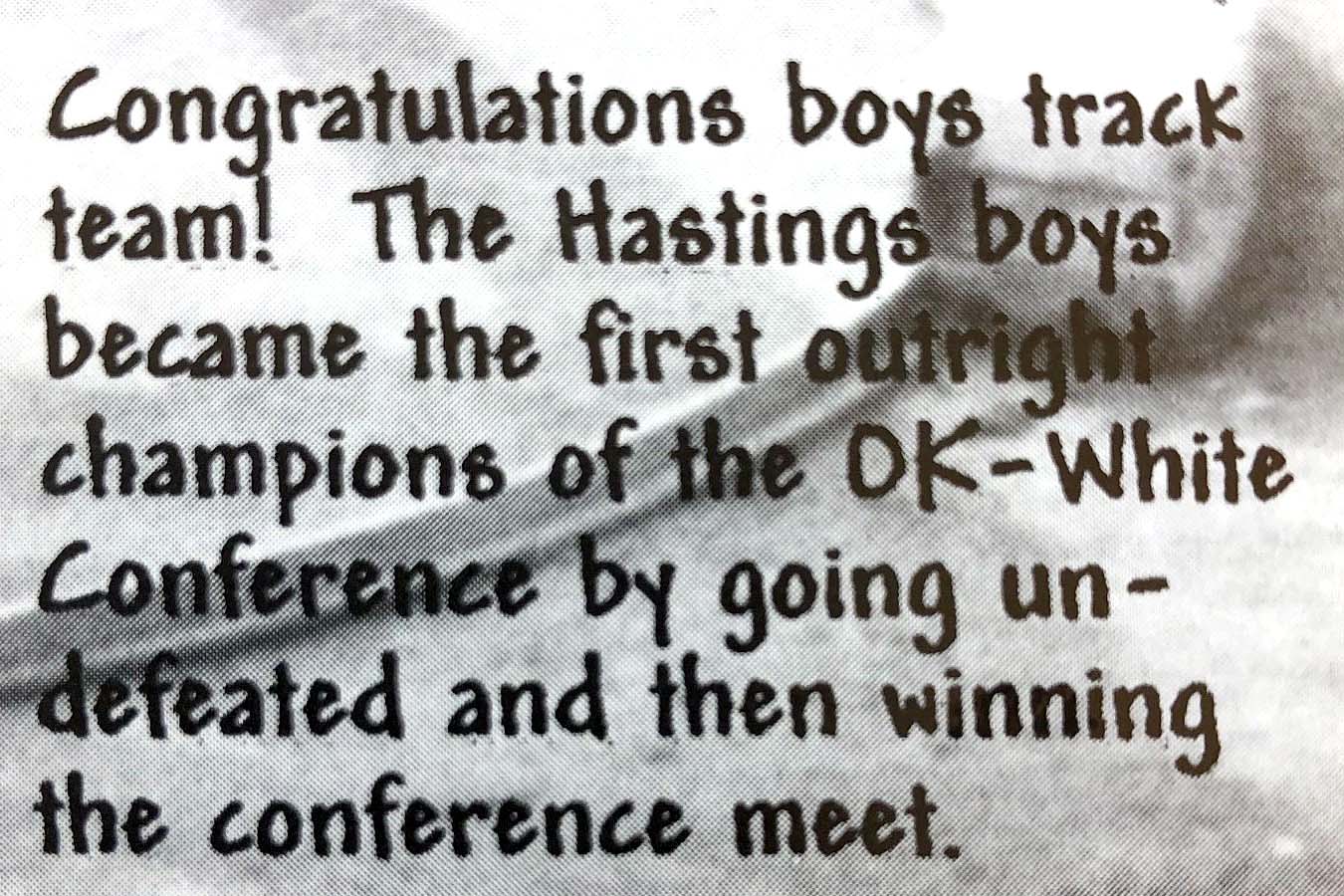 (upper right) Wayne Oom stands with the records boards, the results of a team working together.

(bottom left) A news article about  Bob and Ray Branch at the state meet in 1947.