Posted About One Month Ago by WBCH

Every year, the Police Officer Association of Michigan lauds and honors officers who show extraordinary zeal in their sworn duty to protect the community they serve. For bravely putting the lives of others before his own by stopping an armed shooter before he could do any real harm, Barry County Sheriff Sergeant Scott Ware is one of the Police Officer of the Year Award recipients.

On August 4, 2021, the suspect broke into a house in a residential neighborhood in Hastings and stole numerous firearms, then escaped in his vehicle. The suspect was recently released from prison after resentencing for first-degree murder in Wayne County.

After a Be-On-the-Lookout (BOL) went out for the suspect and his vehicle, a Hastings police officer found the suspect. The officer stopped and questioned him. However, instead of cooperating, the suspect fled the scene in his car, prompting a long and dangerous car chase that spanned three townships.

When the pursuit entered the Village of Woodland, Sergeant Scott Ware intercepted the chase and took command of the pursuit. As the suspect’s car entered Woodland, it swerved into oncoming traffic, almost hitting a vehicle before the suspect maneuvered it back to its lane.

The suspect finally stopped at a busy Mobil Gas Station. The suspect quickly got out of his car, with his shotgun cocked and ready to fire, and he walked straight towards Sergeant Ware, whose vehicle was approaching the gas station. The situation happened so fast that the Sergeant didn’t have enough time to get out of his vehicle.

Fortunately, Sergeant Ware anticipated this move by the suspect, and he had his patrol rifle ready. As soon as he saw the suspect pointing the gun in his direction, ready to fire, he took his police-issued firearm and fired several shots at the suspect through his windshield. Although the shot didn’t hit the suspect, it scared him enough to turn back to the gas station.

The commotion of several loud gunshots panicked the patrons who were now trying to flee to safety. Sergeant Ware, together with the other responding officers, helped the people get out of harm’s way. Unfortunately, the suspect took two gas station employees as his hostage, prompting a long and precarious hostage situation. Successfully, after hours of negotiations, the hostages were released, and the suspect surrendered himself to the police on the scene.

The teamwork of all officers on the scene, and the courageous, tactical decisions of Sergeant Ware, allowed the whole incident to end without any civilian or police officer casualties. Congratulations to Sergeant Scott Ware on this prestigious award! 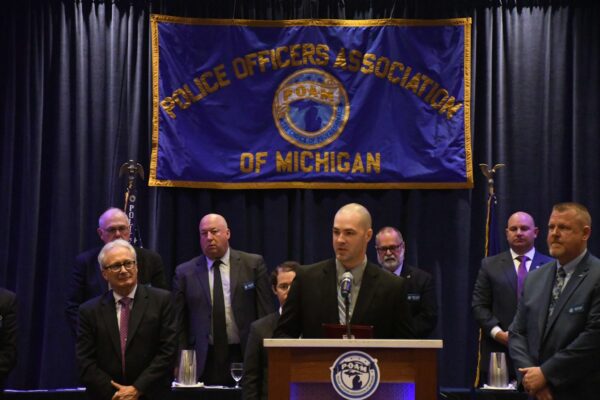