Posted About Seven Months Ago by Beeler-Gores Funeral Home 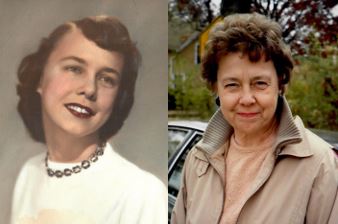 Janet was born on May 2, 1936 at her grandfather’s home in Middleville to Joseph and Florence (Baughman) Fiala. Janet graduated from Thornapple Kellogg schools and was very active in 4-H, band, and was a cheerleader. Janet met Henry J. Arens at Middleville Engineering and Manufacturing company where she worked in the office. They were scheduled to be married on November 15th but soon realized that the opening day of deer season would be interrupted, so instead wed on November 22, 1958. Together they started Arens’ Brothers excavating in 1960.

In her free time, Janet enjoyed vegetable (especially her sweet corn) and flower gardening, anything birds, traveling, going out to eat, and hosting many family dinners for the holidays. Education was important to Janet; she continued her education throughout her life by attending classes at the local community college and reading to young people at the library.

She was an active member at St. Rose of Lima Catholic Church, where she served in the women’s guild, Bingo, and many other church functions. Most important to Janet was her family, and she will be remembered as a devoted wife, mother, grandmother, and great grandmother to so many.

Janet’s family will receive friends on Tuesday, December 21, 4:00 to 7:00 PM at the Beeler-Gores Funeral Home. Mass of Christian Burial will be celebrated on Wednesday, December 22, 2021, 11:00 AM at St. Rose of Lima Catholic Church. Burial will take place at Mt. Calvary Cemetery. A celebration of life will also be held in the spring of 2022.

Memorial contributions to Hastings Public Library or Green Gables Haven in Hastings will be appreciated. A special thanks to all those at Thornapple Manor for their loving care and support throughout the last four years.

Please visit www.beelergoresfuneral.com to share a memory or leave a condolence message for Janet’s family.