At 3am Friday morning the Wayland/Yankee Springs Twp. Fire Dept. responded to a Structure Fire on Sunrise Lane in Wayland Township.   It was reported that all of the occupants were out of the house and there were several explosions heard.

On arrival firefighters found the garage, vehicles that were inside, and residence heavily involved with fire.  The home is a total loss. There were no firefighter injuries however there was 1 civilian injury. 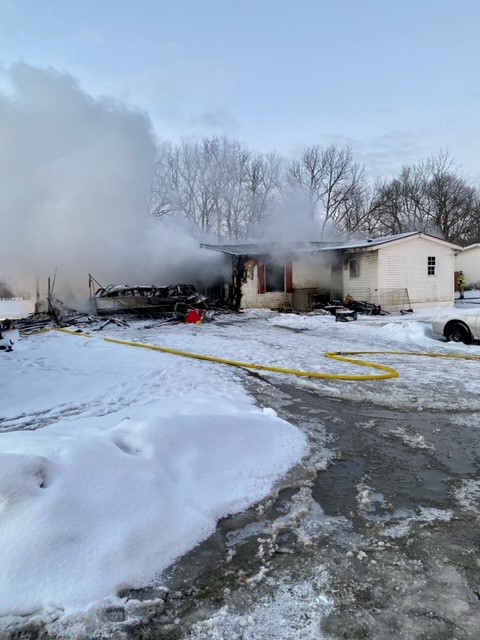 The Freeport Fire Department was called to a commercial structure fire just after 8pm Sunday night at Buskirk Lumber, 319 Oak Street in Freeport after a passerby noticed flames and heavy smoke coming through the roof.

Portions of Buskirk Lumber were back operational Monday morning.  According to Travis Kamps, Manager at the facility they are still purchasing timber, actively logging and trucking logs. The sawmill portion could take a month or more to be back at full capacity.

The cause of the fire is unkown at this time, electrical is suspected. Further investigation will be taking place over the next week.

“We are very thankful for all of the assistance that was provided,” States Chief Jim Yarger.  Approximately 15,000 gallons of water were used to suppress the fire.

No injuries were incurred.

Buskirk has been in business for over 100 years and produces over 10-million board feet of lumber annually.

Ionia County Sheriff’s Deputies were dispatched to a home in the 200 block of Phillip Court south of Ionia on Sunday evening after a resident called 911 and reported that he had stabbed another adult male in self defense.

The stabbing suspect’s name is not being released to the public at this time, as he has not been charged with a crime.  He is an older relative of the decedent and they lived in the home together along with another relative.

Police have determined that there was an argument over the cost of heating the residence, which escalated into threats and name calling, and resulted in Conley attacking his relative.  That relative told officers he armed himself with a kitchen knife and was trying to stop the attack when he stabbed Dennis Conley in the chest, causing Conley’s death.

Drug use and underlying mental health conditions are factors. The Ionia County Prosecutor’s Office is reviewing the case to determine if criminal charges will be filed.

Meanwhile the Michigan Department of Transportation (MDOT) says that effective 6 a.m. Friday, March 4, weight restrictions will be imposed and enforced on state trunkline highways in the lower half of the Lower Peninsula.

When roads that have been frozen all winter begin to thaw from the surface downward, melting snow and ice saturate the softened ground. During the spring thaw, the roadbed softened by trapped moisture beneath the pavement makes it more susceptible to damage. This also contributes to pothole problems already occurring due to this winter's numerous freeze-thaw cycles.

State Senator John Bizon of Battle Creek, who represents the 19th District that includes Calhoun, Barry, and Ionia counties, entered a guilty plea on February 17th to the sole count in the complaint that charged him with committing an assault and battery, on August 14, 2021, at Oaklawn Medical Group in Marshall, Michigan.

Pratt handled the case after the Calhoun County Prosecutor recused himself. The offense is punishable by up to 93 days in jail and/or a fine of $500.  Sen. Bizon’s sentence will be determined by the Judge at a sentencing hearing, which has not yet been set.

Thornapple Kellogg Board of Education this week approved the hiring of Chris LaHaie as the new district assistant superintendent. Craig McCarthy, who formerly held the position, was named the district’s superintendent after serving as interim superintendent since September. LaHaie currently is employed with Cedar Springs Public Schools and will start work at TK Feb. 28.

LaHaie has a variety of educational experience in his background. He taught for 10 years as a math and chemistry teacher at Jenison Schools, and has obtained both a Master of Arts in Educational Leadership and in Business Administration. He has earned Chief Financial Officer certification through the Michigan School Business Officials and has served in the capacities of Director of Finance and Operations and Deputy Superintendent of Finance and Operations. In addition to his teaching background, LaHaie has also coached high school baseball and tennis for many seasons.

Brandon Strong, Administrator, says "We are excited to be partnering with Leighton Church to bring Classical Christian Education to the Middleville community!"

Barry County Christian School  Middleville is making plans to serve area families during the 2021-2022 school year as a K-6th grade school in March. BCCS hopes to add grades 7-12th in the fall of 2022.

Michele Hinthorne is the Principal for the Middleville location. 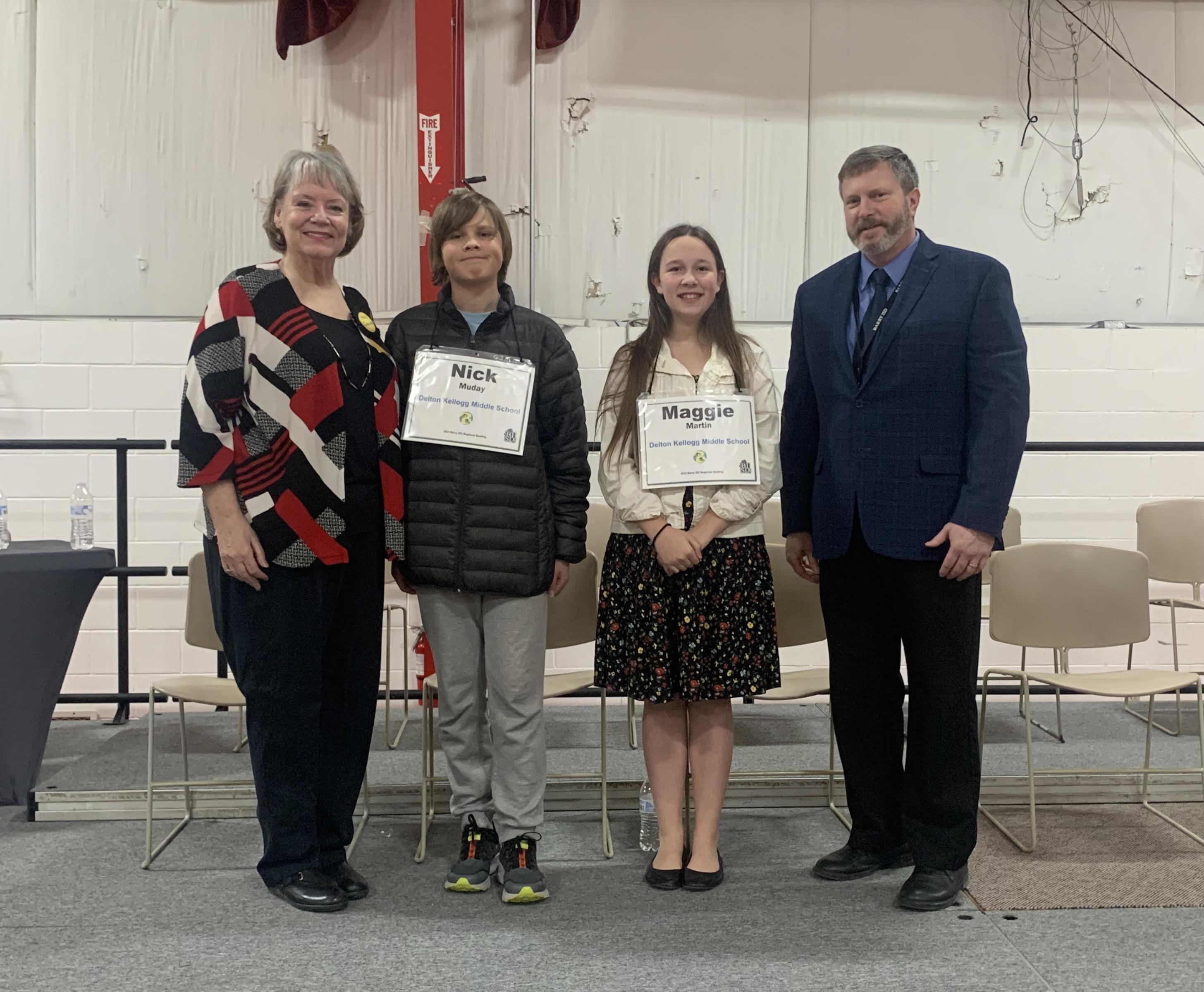 Nick will compete against students from all over West Michigan for the honor of spelling at the Scripps National Spelling Bee in May in Washington, D.C. 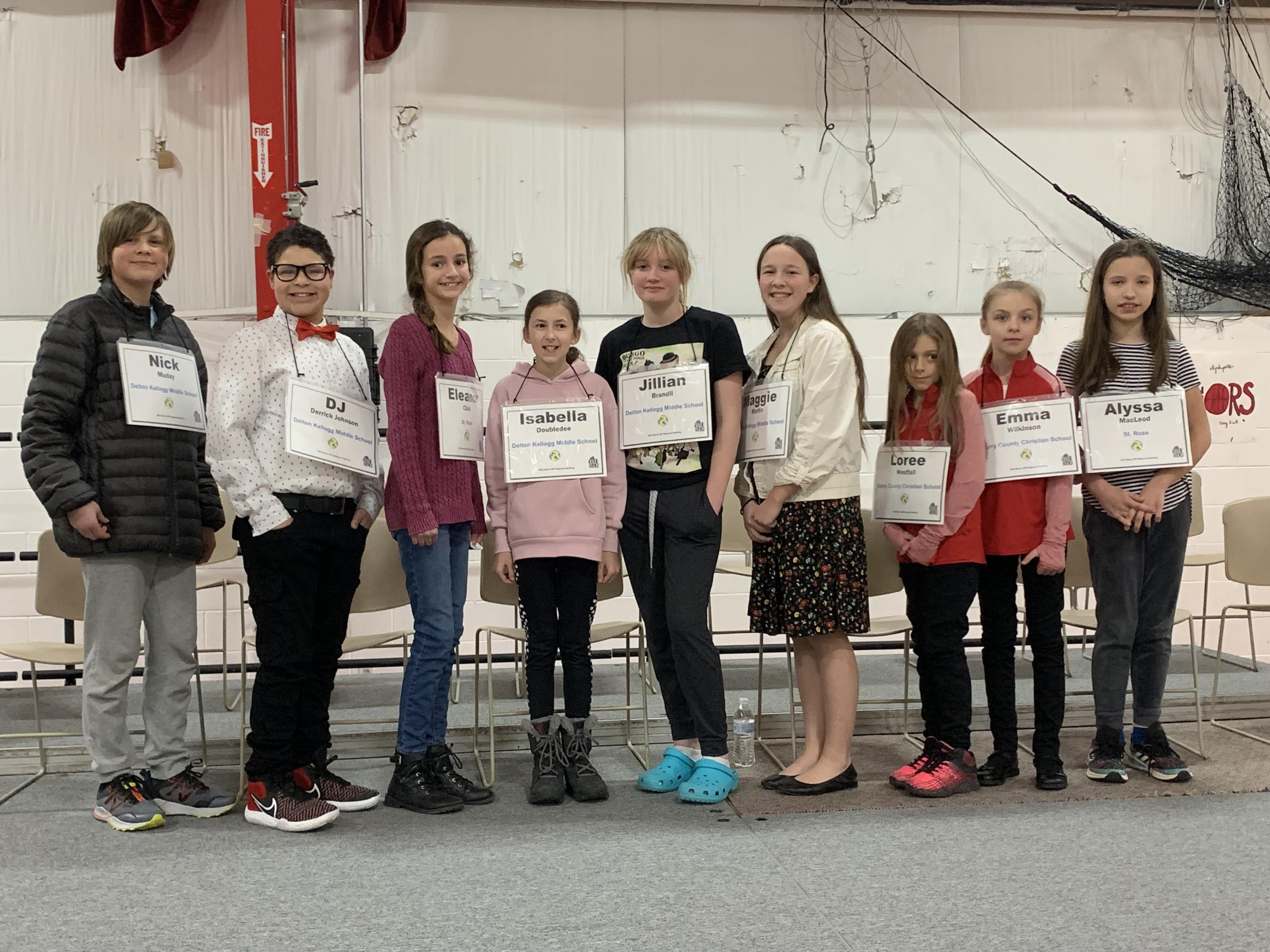 Rich Franklin, Barry ISD superintendent, said that the evening was a great success and a chance for the students involved to show off a little of their academic prowess. "Each student up on that stage is supported by parents, grandparents, teachers, and others in the audience who are so proud that they made it this far, and so glad they're not up here spelling, themselves!" Franklin said.

Qualifying but not competing were Robbie Bever, Trevin Ewing, and Madison Gruber, all of Delton Kellogg Middle School.

Mrs. Mary Collier was the pronouncer for the bee once again this year. Judges were Mrs. Suzanne Shorey, Dr. Bob Becker, and Mrs. Kathy Forsyth. Mrs. Deb Hatfield and Mrs. Cloe Oliver were the registrars.

The Council approved the appointment of William Nesbitt to fill a First Ward seat on the City Council that became vacant with the recent resignation of Therese Maupin-Moore.  Nesbitt will serve the remainder of the term through December, 2022.

Council heard an update from Community Development Director Dan King on the city’s application process to engage in the Redevelopment Ready Communities program through the MEDC.

-Council approved the final assessments for sidewalks to be built on West State Street between McDonald’s and Aldi’s.

-Held the first reading of an ordinance regarding auto repair shops, gas stations, and car wash facilities in the B1 business district.

The Hastings February Board meeting was held at Southeastern Elementary School on
Monday, February 14, 2022. Principal Dana Stein presented to the Board of Education,
showcasing the new instructional technology that has been implemented in all classrooms. She also highlighted the benefits of Beasley, Southeastern’s Social-Emotional Support dog. Beasley is an important part of the school’s staff and supports students in a variety of ways. Hastings is currently looking into providing additional Social-Emotional Support dogs in other Elementary schools.

The Hastings Athletic Boosters have donated $29,858 for six projects in the district. The district will be committing $14,712 to assist with these projects to invest in the future of our athletic programming. The projects include: a new sound system for the High School gym; 40 new chairs for the High School gym; a softball batting cage; a new diving board and swim equipment; tents for track and cross country; and a new set of baseball uniforms.

The Board approved the Hastings High School Band trip to Orlando, Florida, from March
29-April 3, 2022, to visit Universal Studios. They also approved the School of Choice resolution for the upcoming school year, as well as a donation from the Friends of the Hastings Performing Arts Center in the amount of $14,266 for stage decks and skirting.

On friday a semi truck struck a utility pole on michigan avenue in hastings near quality aluminum knocking out electric service to consumers energy customers.

Consumers crews spent most of the day repacing the pole and restoring electric service to the area.

The Barry-Eaton District Health Department (BEDHD) is offering FREE KN95 to the public for pick up at both Barry & Eaton offices. Masks are available for pick-up at the Charlotte office, located at 1033 Health Care Dr. Charlotte, MI 48813 and at the Hastings office located at 330 W. Woodlawn Ave. Hastings, MI 49058 during regular business hours Monday – Friday from 8am to 5pm. Please note the offices are closed for lunch between 12-1pm.

Masks will be available to community members for pickup at the Environmental Health or Clinic front desks in packs of 10 for each household on a first come, first served basis while supplies last. Please wear a mask inside the building when picking up KN95 masks.

BEDHD also recommends staying up-to-date on your COVID-19 vaccine and upgrading your mask to a high filtration respirator like a KN95. Wearing masks in addition to vaccination are our best tools against COVID-19.

Hastings DPS crews are working to repair a water main break at the intersection of N.Boltwood and E. Francis St.

Repairs are expected to be completed by 5 p.m. Wedensday.

A street closure will take place on E. Francis St. Between N Michigan and N. Hanover St. and on N. Boltwood between E. Williams St. and E. Woodlawn Ave.

The Hastings National Weather Service Climatological Station recorded at total of 10 inches of snow In Hastings from Wednesday's heavy snowfall.

Brad Johnson, Chairperson of the Board for the Department of Health and Human Services in Barry County, remarked on Monday, January 31, 2022, that it was with great regret the board has accepted Don Haney’s notice of retiring. “He has given us a long runway to find the next Administrator of Thornapple Manor. We have enjoyed the strong leadership that Haney has brought to Thornapple Manor and he will be hard to replace – there are big shoes we will have to fill.”

Haney started at Thornapple Manor as the Controller in 2006. He accepted the role of Administrator when Jim DeYoung retired in 2012. Recently Haney stated that he would be retiring to something, not from work (Hastings Banner 1/27/22). Don announced this week his plan to retire some time toward the end of the year. “I want the board to have plenty of time to find the next Administrator and feel I will be leaving that person with a remarkable leadership team.”

As he now looks at retirement he said “I am excited to see what that future will look like, but I know a lot of it will be based around my family. I also plan to continue to stay active in our industry.”

When asked about Haney retiring sometime this year, Director of Nursing Liz Bishop replied “Thornapple Manor has been blessed to be represented by Don Haney over the past decade. He has not only advocated for our residents and staff, but has also been a trusted voice for the long term care community as a whole. It has been my pleasure to call him my fearless leader, trusted advisor, and friend.”

Recently Haney received the Barry County Chamber’s 2021 ROTH award. He is a true champion of his community as evident by the boards he serves on, the involvement he has at state and national level on behalf of the residents in long-term care, and, his belief in creating an open and inviting business environment. He shows this in his life, career, and commitment every day.

Hastings City Police were dispatched shortly after 9pm Tuesday to a single vehicle accident near the intersection of North Broadway and Indian Hills Drive. Officers arrived and found the driver, 54 year old Shawn David Sevy of Hastings, deceased on the scene. The cause is still under investigation at this time. Sevy was the only occupant in the vehicle.