WBCH and our Partners; McDonalds of Hastings, Southside Pediatrics, PFCU Caledonia & Lake Odessa Branches are collecting new unwrapped gifts for Toys for Barry County Kids.  Lani Forbes, Director of Barry County United Way talked with Chad Henry this morning about the Program, how to register for help and update of age groups signed up.

Hastings Mayor David Tossava will be the  new President of the Michigan Association of Mayors beginning  this coming January 1st.

Mayor Tossava and the Auburn Mayor were elected for the positions at the organization's annual board meeting  on October 20th. 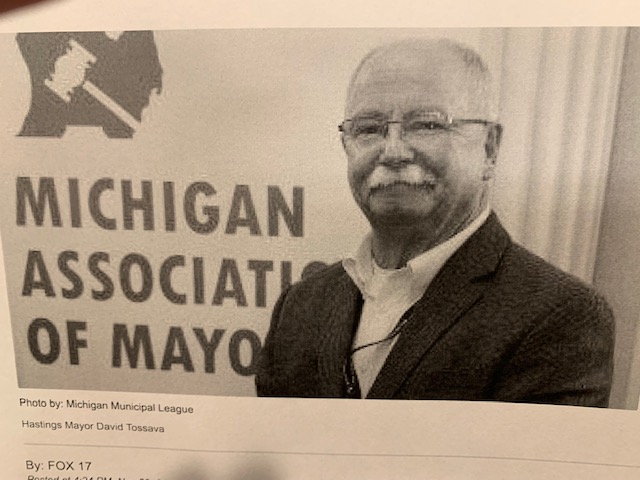 A ribbon cutting was held Tuesday afternoon at the “Lofts @ 128”,  which is the new apartment building located at 128 North Michigan Avenue at the corner of Apple Street in Hastings.

The four-story, 24,000-square-foot building features 21 one- and two-bedroom market rate apartments which are already occupied, with a waiting list. The first floor will offer retail and office spaces, however no commercial tenants have yet been announced.

Construction began on the $4.9 million dollar project in November of last year. The city of Hastings worked closely with the general contractor, A.J. Veneklasen, to get the project completed to address the growing housing needs of an underserved part of the community. The project provides great walkability to all the City of Hastings has to offer – shopping, dining, and great community events.

Each week up to Dec. 16 we will have more gift ideas and updates from Lani .  For more information about Toys for Barry County Kids Listen to this interview.

When Bill Sweeney recently decided it was time to retire, there was only one company that Bill and his family was willing to sell Les’s Sanitary Service to after more than 50 years in business; Granger Waste Services.

Les’s and Granger have reached an agreement to combine operations beginning December 1st  when Granger will assume Les's customers.  Several Sweeney family members and Les's staff will continue to serve the community with Granger.

Like Les’s, Granger is family owned and operated and has served mid-Michigan for 56 years.

Bill Sweeney and Keith Granger had these comments:

The Board took action on approving the 2023-2024 and 2024-2025 school calendars. These will be posted on the district's website within the next week. They also approved a bid on the Star School Elementary roof, which will start in the summer of 2023.

Lastly, the Board recognized donations from the Barry Community Foundation in the amount of $1,250 in support of the school’s emotional support dog. The Friends of the Hastings Performing Arts Center donated $5,000 in support of the fall play. The Hastings Education Enrichment Foundation donated $14,235 toward many classroom resources throughout the district. Al and Pete’s Sport Shop donated $2,000 toward supporting students in need. Southeastern Elementary received a $500 anonymous donation toward purchasing playground equipment and $1,000 from the Bosma Family to assist students in need. Lastly, the Star Elementary PTO
donated $8,873 toward purchasing new library furniture.

The next Hastings Board of Education meeting will be held at Hastings Middle School on December 19, 2022, at 7:00 p.m.

A State Police Cruiser was damaged as the result of a two-vehicle crash in Barry County's Hope township Thursday.. No was injured. The driver in the crash received a speeding citation.

The state police said, "it's your obligation to maintain control of your vehicle at all times.  Driving to fast for conditions can lead to a crash."

The Hastings Saxons were defeated by Edwardsburg Friday night, 24 to 14 in the division 4 regional of the high school football playoffs.

It was the first time in school history for the Saxons to advance to the regional final.  Hastings ends an outstanding season with a record of 10 wins, 2 losses.

Blue Zones and the Barry Community Foundation are pleased to announce the extension of Blue Zones Activate in Barry County for two more years.

Blue Zones uses scientifically proven lessons of longevity, health, and happiness to boost the well-being of entire communities. The company’s work is based on research and principles developed by Dan Buettner, National Geographic Fellow and New York Times bestselling author, who identified the cultures of the world—or blue zones —with the healthiest, longest-living populations.

Blue Zones focuses on the single largest determinant of our health: the place we live. By focusing on the places where people live, work, learn, and play, Blue Zones has been able to help communities move the needle in improving overall population health and reducing healthcare costs. The innovative strategy is built on the foundation of improving food and built environment policies that improve population health and reduce health disparities.

After serving three years as the Blue Zones Activate Executive Director, Allison Troyer Wiswell will transition to a new position on the Blue Zones national team as an account executive; in her new role, she will be actively involved with the work in Barry County as well as in other communities around the country. Catherine Getty has been chosen as the new Executive Director of Blue Zones Activate Barry County. Getty formerly served as the Planning and Zoning Administrator for Thornapple Townships, was a Barry County Commissioner, and has been involved in the Blue Zones work over the past three years. Rachel Walsh, a landscape architect currently pursuing her Master of Public Health, will serve as the community coordinator and project manager.

The team is well-positioned to capitalize on the success of the work already accomplished including the development of the countywide trail plan and the advancement of a community food center for Barry County. The initiative is funded by public and private sponsors aligned under the shared goal of advancing the well-being and quality of life for everyone in the region.

Three of the new troopers; Chance Stevens, George Bothma of Rockford and Kevin Brown of Greenville are being assigned to the Wayland Post and the Hastings Detachment located at West State Street in Hastings.

In Middleville  Ann Williams, MacKenzi Peters and Richard Hamilton were elected to serve as Trustees on the Village Council.

In Delton, Julie Auckerman, Samatha Munsell and Kathleen Forsyth were elected to serve full terms on the Delton School Board. Johnathan Osborne was elected to a partial term.

In Hastings, Justin Peck and Jennifer Eastman were elected to serve on the Hastings School Board of Education.

Thursday the Michigan State Police will hold the graduation ceremony for the 142nd Trooper Recruit School. During the ceremony the 59 recruits will be sworn in as Michigan State Police Troopers and will be assigned to their MSP posts across the State.  The Wayland MSP Post will be getting three new troopers, George Bothma, Kevin Brown, and Chance Stevens. Congratulations to all of the new MSP troopers of the 142nd recruit school.

Some 16,545 votes were cast in Barry County -- a strong turnout for a midterm election.

Barry County voters leaned Republican for Tudor Dixon in the governor’s race,  60% to 38% over Gretchen Whitmer,  and by similar margins in favor of the Republicans running for Attorney General and Secretary of State.

In the Barry County Commissioner race in District 1,  Bob Teunessen was elected over Scott Savage.

(There were no contested Commissioner races in Districts 2-7)

Elected to the Hastings Board of Education were Jennifer Eastman and Justin Peck.

Hastings will now meet Edwardsburg who defeated Niles 24 to 17.

Hastings will play at Edwardsburg Friday, Nov. 11th at 7pm. 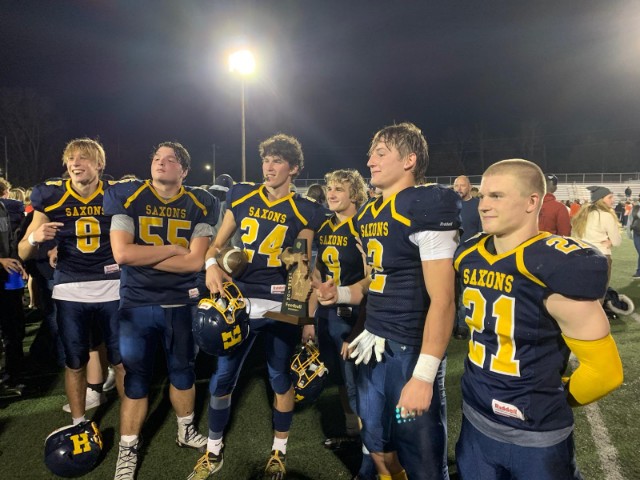 The Hastings Police Department has begun enforcing the No Parking Between 2am and 6am as of Wednesday, November 2nd. Enforcement will continue throughout the winter months. The fine for parking on cfity streets between 2am and 6am is now $15 for each violation.

If there is a snowstorm, and the Dept of Public Works cannot plow around your vehicle, it may be towed.