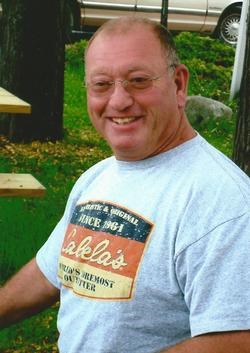 George Conrad Winick, age 67 of Hastings, passed away peacefully at home surrounded by his loving family on February 27, 2016, after a short courageous battle with leukemia. He also fought valiantly the past 6 years with Multiple Myeloma Cancer.

George was born March 12, 1948 in Hastings, MI, the only son of Myer and Dena (Epstein) Winick. After graduation from High School he enlisted in the U.S. Army, and later joined the 82nd Airborne Division B, Company 2nd Battalion, and served from 1967-1969 and was honorably discharged. Following his military career George a.k.a. "Colonel Winick" joined the Hastings City Police Department and became the first bicycle officer to serve our community. George was a proud member of the Hastings City Police for 27 years prior to retiring. After his City retirement George joined the Barry County Sheriffs Department as a Court officer. George felt this was his true calling. Due to ill health after 10 years he was unable to continue working. George was well liked, and respected by the community and known to be a fair "peace" officer. He made many wonderful and lasting friendships during his careers. George was a true character to all that knew him and was always ready to talk movies and boots and known for his many grasshopper and Yuma quotes. He was also a member of the Hasting Elks Lodge.

George is survived by and forever in the heart of his wife Kristi, three children from a previous marriage to Kathy Covey, son, Nathan (Kathryn) Winick of Hastings, daughters, Melissa Winick of Hastings and Lisa (Jim) Zuck and their children of Marshall. He also leaves behind a step-daughter Shayna (James) Gibbons of Battle Creek, and Justin Selleck of North Carolina. George is survived by his beloved grandchildren: Carson and Abigail Winick and by the newest grandbaby Raylan Gibbons. He is also survived by sisters Rhoda Mix of Hastings, and Cinda Hoogerland of North Carolina, mother-in-law, Ingrid Wilson Morgan, sisters-in-law, Carla (Ron) Neil, and Traci (Stephen) Wales all of Hastings, brother-in-law, Geno Genovaldi of Illinois, numerous nieces and nephew as well as great nieces and nephews. He also leaves behind long time best friend Gerald Bachelder and constant companions Ivy and Mama kitty.

We are deeply grateful for the wonderful care provided by his Spectrum Hospice nurses during his brief stay at home. We are also very thankful for the prayers, visits, calls, cards, flowers, and food provided by family and friends.

According to George's wishes, cremation has taken place and his ashes will be scattered at a later date, alongside his mother.

In Lieu of flowers donations may be made to the Hastings City Police Cadet Program, City Hall, Hastings, Michigan.