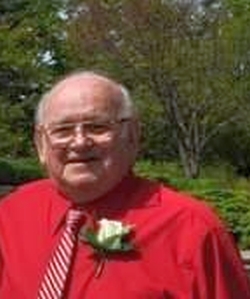 Mellvo (Mel) J. Beach was born April 20, 1938 to Harriet and Henry Beach in Battle Creek, Michigan.  He passed away on October 28, 2018 surrounded by his family after a long battle with COPD.

He was a husband, father, grandfather, and friend.  He and Sue Cullers were married 60 years and raised five children who adored him.  He enjoyed many outdoor activities.  Some favorites were cutting wood, hunting, making maple syrup with friends, gardening, and lawn/landscaping work.  Other favorite activities were vacationing with his family, especially his grandchildren, and family get togethers where he could indulge in favorite meals and share laughs. He was a fiercely loyal and supportive family man. He always enjoyed a good conversation with friends, some of whom he met that very moment. In his younger years, he played and umpired baseball,  Mel enjoyed country music.  His family fondly remembers him singing his favorite songs.

Mel retired after 29 years of working at Bradford White where he was known for his hard work and tenacity.  He was also a former deacon at Quimby Church.

Mel is survived by his wife, Sue, and children Val (Dave), Dawn (Tim), Joe (Kim), and Robin (Michelle); his grandchildren Jessi and Ben, Brianne and Joe Jr.,  Dale, and Courtney and Timmy; as well as 14 great grandchildren.  Sadly, Mel's loving daughter and name sake, Melva Josephine, went to be with the Lord on March 16, 2013.  He was also preceded in death by his parents, Henry and Harriet, and siblings, Joann, David, Charles, Tom, and John.

Special thanks to Sharon and Tina and their families for all of the love and support.

Memorial contributions may be made to Barry County Youth Day; 1611 S. Hanover street suite #105, Hastings, Michigan 49058 or charity of ones choice.

Grave side services will be held November 11 at 1:00 at Dowling Cemetery. Luncheon to follow at Baltimore Township Hall in Dowling.

She graduated from Maple Valley High School in Nashville.

Joyce married Stuart J. Benedict on October 29, 1949, they were married 60 years when he died on January 6, 2010.
They traveled the world together and also owned and operated Northside Grocery in Hastings and Acme Bedding in Kalamazoo.

Joyce was preceded in death by her Parents, husband Stuart, son, Michael and his wife Dawn (Burnham) Benedict.

Memorial contributions would be appreciated to the American Cancer Society or St. Jude Children's Hospital.

Robert was born in Buelah, MI on November 11, 1927, the son of the late Benjamin and Aneta (Stormfeltz) Taylor.

He was raised in Buelah Michigan graduating from Benzonia Combined High School in 1946.

He was the widower of Naomi (Froats) Taylor. The couple were married June 28th 1952 in Central Lake Michigan. Naomi was Bob's lifelong companion in his ministry until she passed away in 2014 after 62 years of marriage.

Shortly thereafter he continued his education at Zion Bible College in Illinois where was training to pursue a career as a minister. After finishing his bible training, Bob went to work at the Pepperidge Pie Factory, while pastoring at the Platt Assembly of God. In 1959 Bob become the Senior Pastor at Charlotte Assembly of God Church, where he served for 3 years. From there Bob and his wife Naomi were called to the Nashville area, where they were initially to evaluate whether the church should be closed; instead Bob & Naomi poured their lives into growing the church, eventually constructing a new church building and parsonage which is still in use today Rev. Taylor served as the senior pastor at the Nashville Assembly of God for 25 years before retiring in 1992.

After about 2 years of "Retirement" Bob's passion for the ministry was directed toward the RV MAPS program who's mission is to construct churches throughout the United States. He was a valuable addition to the organization for 15 years, because not only did he have a thorough understanding of the ministry as a pastor, he also was extremely proficient in operating heavy equipment. Even during his elder years when he became a resident at Thornapple Manor, Rev. Taylor began a ministry with the residents. Each morning he would visit each individual wing, praying for the residence.

The family will receive visitors Friday October 5, 2018 from 6-8:30 PM at The Daniels Funeral Home in Nashville, MI.

Interment will take place following the funeral luncheon at Hosmer Cemetery in Nashville.

Memorial contributions can be made to the Nashville Assembly of God Church - Building Fund.

Funeral arrangements have been entrusted to the Daniels Funeral Home in Nashville. For further details please visit our website at www.danielsfuneralhome.net