Kenneth James Robbe, age 92 of Hastings, passed away peacefully on January 17, 2019 at his home with his family by his side in Tucson, Arizona. 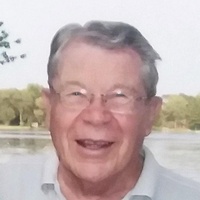 Kenneth was born on May 16, 1926 in Ypsilanti, Michigan, the son of John and Hazel (Winters) Robbe.   Kenneth attended Roosevelt High School in Ypsilanti and graduated with honors in 1944.   He honorably served in WW II with the US Army from 1944-1946.  Kenneth married Cynthia Ann Everett on September 7, 1947.

Kenneth’s hobbies included bowling, card playing, dancing, gardening, fishing, and camping.  He was a member of the Hastings Rotary, serving as the President for one year, the Jaycees, and the VFW.  Kenneth was a member of the Emmanuel Episcopal Church in Hastings and served as Vestryman, Senior Warden, Verger and Treasurer.

A memorial service will be held at a later date.  Memorial contributions may be made to the Emmanuel Episcopal Church, 315 W Center St, Hastings, MI 49058.

Robert Clayton Shurlow passed away on January 10, 2019 but lives on in the hearts of his family and in the fields and woods of the farm he loved. Born February 3, 1937 to Clayton and Frances Shurlow on the farm he loved and worked his entire life.

Robert was in 4-H, FFA and was a member of MMPA and NRA.

He loved hunting; the love of hunting was inherited by his kids and his grandson Levi Shriber, who is known for his ability to get the biggest bucks on the farm. He shared his love of farming with his family who has carried on this legacy.

Robert married SuAnn Anders on September 7th, 1957. Together they raised 3 children, Jeanie Shurlow, Kelly (Mike) Shriber and Jim Shurlow. He is survived by his wife and three children, Grandchildren Michaela (Chad) Henry, Levi (Danielle) Shriber, and Devin Mckee, and five beautiful great grandchildren.  The little Shriber herd, Paisley, Cole, Sophie, Chloe, and Natalie. Robert is also survived by his sisters Dorothy Flint and Cathy (Dave) White. He is preceded in death by his parents, sister Marilyn Shurlow and sister Patty Burd. And his mother and father in law Laurence and Arloa Anders.

Family and farming was Bob’s life, a life he loved and worked very hard at. The farm was his love, not his job. Robert was a dairy farmer, raised beef cows, sheep, and was known as a hardworking man for the long hours he was out working the fields and could be seen with one of his special dogs riding with him, but to him it wasn’t work as much as it was doing what he loved. He loved Case tractors and put many long hours on them. He worked his tractors, but also pulled them in tractor pulls, bringing home trophies. Picnics at the pond, pizza parties when spring planting was done or harvest was over with his family were special to all of us. Christmas, birthday parties and Sunday dinners, any reason for the family to be together are all treasured memories. He shared many stories of his parents and stories of growing up with us which are so cherished. So many memories of a great man. Rest easy, the chores are done. Ride off into the hills on your 730 Dad, we love you.