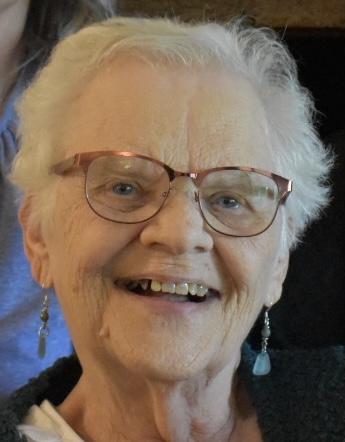 Haroldine was born February 16, 1933 in Coldwater, Michigan, the oldest child of Harold and Wilhelmenia Hartley. She graduated from Parma High School and then worked in Jackson, where she met her future husband. She and Donald Lee Brail were married May 9, 1953 in Parma, Michigan.

In 1964, Haroldine and Don responded to God’s call and moved to Iowa to begin a lifetime of Christian ministry. They faithfully served Free Methodist pastorates in Iowa City, Hamburg, Sioux City and Toddville, Iowa; then Hastings and Zeeland, Michigan. Haroldine loved to sing and was a frequent church soloist. In retirement, they were active in Senior Adult ministries throughout northern Michigan.

Haroldine was devoted to Jesus and her family. She loved family gatherings and cherished her seven grandchildren and eight great grandchildren. She was a fierce competitor at table games and a jigsaw puzzle enthusiast. Haroldine was a diehard fan of University of Iowa football and basketball and the Detroit Tigers, but her favorite sports were those played by her children and grandchildren.

Visitation is planned for 4 to 7 pm Friday, September 17 at Girrbach Funeral Home in Hastings. Funeral services will be at 10 am Saturday, September 18 at the Hastings Free Methodist Church, 2635 M-43, Hastings, MI 49058. A private interment will be held at Fort Custer National Cemetery in Augusta, Michigan. Memorials may be directed to Samaritan’s Purse, PO Box 3000, Boone, NC 28607.  Arrangements by Girrbach Funeral Home.  To leave an online condolence, visit www.girrbachfuneralhome.net.